Over on eGullet, we’ve been studying the different regions of Italy. This month, it’s the Veneto

Here is the post that appeared on eG, but come and join us over there. What could be bad about cooking like you were in Venice??

After
the relative austerity of  last month in Trentino Alto Adige, rip open your cabinets,
gather up your spices, butter up your fishmonger, get the spit ready
for some birdies, and open a bottle of Amarone. We are wallowing in an
abundance of ingredients!

The Veneto reaches up into the Alps,
and then spreads the hem of her skirts along the Adriatic, beguiling
and bewitching with its lagunas and estuaries, refreshed by the Po and
Adige rivers and various lakes. The Veneto is divided into seven
provinces: Venice, Verona, Vicenza, Padua, Treviso, Belluno and Rovigo.
It’s the number one tourist destination in Italy. And the capital of
the Veneto is that most amazing of cities, a floating fantasy, a folly,
a magical apparition: Venice. The
Veneto cuisine runs the gamut from the simple mountain cuisine of
Belluno to the celebrated dishes of Venezia and Verona. Spices, or more
practically speaking, the trading of spices, was very important to
Venice. Pepper was particularly prized, as a spice and preservative, it
was sometimes used as part of a dowry or as in inheritance.

Venezia
As
in common where there is a dominant city with royalty and an upper
class, there will be two distinct styles of cooking: the elaborate,
highly spiced cuisine and the humble food of the peasant. Venice is
certainly no exception, especially where the use of spices granted you
the status of a rich man.
One dish that is always mentioned as the
signature dish of Venice is: risi i bisi. A humble origin dish, that
transcends to the sublime when the peas are fresh and shelled moments
before mingling with the rice. What is interesting is that in the
Veneto, rice and polenta figure more prominently than pasta. Aside from
the famous risi i bisi, which is somewhere between a soup and a
risotto; rice is combined with myriad ingredients including, but
certainly not confined to: cabbage, broccoli, celery, tomato, and
sausages for an infinitive variety of soups.

The pasta
exception is bigoli, which is an extruded pasta. This pasta combines
soft and hard wheat and eggs, making an exceptionally firm pasta which
is too strong to be rolled and pressed in the regular manner, so a
torchio, or press, with various sized perforated plates is used. Older
versions of the torchio had a little bench to help give you some
leverage to turn the screw of the press. 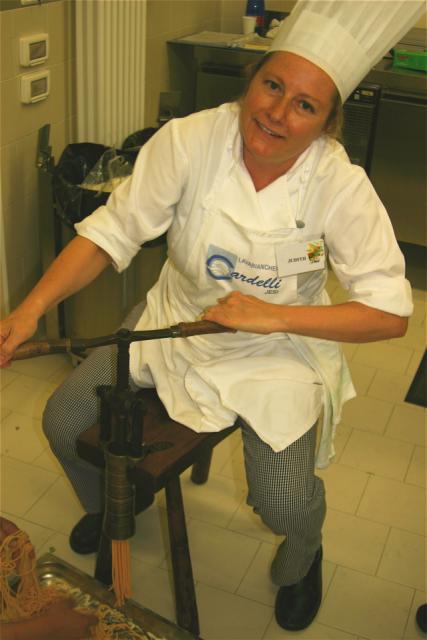 Traditionally
the bigoli is served with a variety of sauces, including a simple
sardine or anchovy sauce, or a richer duck sauce.

In older
texts, there is frequent mention of “la zuca baruca”, a magnificent
yellow squash, that is cooked in the oven and then sold on the streets.
Does anyone know if this still happens?

Fish and shellfish
come in seemingly endless varieties in Venice. The lagoons being a very
benevolent place to breed all sorts of goodies: scampi, crabs, ray,
branzino, sole, anchovies. Fish in the Veneto is cooked in primarily
two ways: roasted or fried. And yet, with all this abundance, the
Veneziani (?) are particularly fond of baccala (salt preserved cod
fish) or stoccafisso (air dried cod fish). Pay attention here; some
recipes use the two words interchangeably, but they produce different
results. In Italy, it is more difficult to find stoccafisso outside of
the Veneto and le Marche than it is to find the traditional baccala.
“Baccal mantecato” is often mentioned with particular fondness, and it
seems to be a dead ringer for the French brandade de morue: cod,
potatoes and garlic are emulsified into a sort of pudding. Now, I’m not
going to debate the origins of this dish, because even the Spaniards
lay claim to inventing it!
Another typical Venezia flavor
combination is ‘in saor’, which is a sort of sweet/sour flavor, with
the sweet coming from sweet onions, and the sour coming from vinegar.
In the winter months, raisins and pine nuts are commonly added. A
classic recipe: “Sardines in Saor”, is wonderful, only coming to full
flavor after about 5 days of being submerged in a pile of onions,
raisins, and pine nuts.

Although meat is not a prominent
feature of the Venezia diet, “fegato alla Veneziana’ is a prized dish.
This dish uses veal liver, thinly sliced and cooked in a combination of
olive oil and butter, onions and parsley. “Agnello alla Veneziana”
calls for lamb shoulder combined with butter and milk and roasted.
“Langue alla Veneziana” is a beef tongue dish, served cold and thinly
sliced as an antipasto dish.
Throughout the Veneto, courtyard
animals are eaten, frequently roasted on a spit, and game birds are
also prized. There are wonderful descriptions of spit roasted quail,
wrapped in pancetta, with juices caught in a pan and then served on
either a bed of beans or polenta.

My trusty 1931 “Guida” lists
the following breads as coming from Venezia, but it lacks any sort of
description of the bread itself: “ciope”, “rosete”, “pan Tedesco”
“montasu” and “saltimpanza”, which is descriped as bread made from milk
and used for soup. Obviously, further research is required!

Padova
The
cuisine is described as being very similar to Venezia. Rice and polenta
play an important role, along with fresh made taglatelle and lasagne,
and dried bigoli. Prized for its delicate, almost sweet white meat is
the Padova hen. Reading older recipes, it seems that the Padova people
were also fond of confit of goose, duck and chicken. It is described as
“oca in onto”, goose meat preserved under fat, which sounds like confit
to me.

Verona
Verona is said to have the oldest vegetable
market in the country, which would be quite amazing if it could be
proved, or if it was true! In Verona, meat plays a large role, with
dishes such as “riso efigadini: a risotto made with chicken, beef,
chicken liver, and sausage. “Peperat” or “peara`” is a typical dish of
boiled meat combining breadcrumbs, ox bone marrow, abundant black
pepper cooked in an earthenware pot over a slow flame.
The
Veronese (?) are particularly fond of gnocchi made from potatoes and
flour. An old tradition on the last Friday of Carnevale involves a
parade of people dressed in 14th century costumes and is presided over
by the “Father of the Gnoccho”.

Rovigo
The cuisine of the
Rovigo province is described as simple and modest. Here various meats
are roasted, snails are cooked with onions and river fish are prized. A
particularly good sounding recipe for guinea hen calls for the bird to
be stuffed with a clove studded onion, and cooked in a pot with oil,
butter, pepper and onions.

Belluno
This province is simple
Alpine cuisine. Descriptions of various soups reveal the poverty that
must have existed in this region: simple potato soup, orzo with milk,
flour which has been fried in fat and then served in salted water,
breadcrumb soup. Frequently milk is used as the basis for the soup
instead of meat based broths. Polenta is a substituted for bread. Game
birds figure prominently, along with other fruits of the woods: nuts,
chestnuts, and berries.
One of Belluno’s most prized products is
the “Lamon bean”, which appears to have been brought from Spain in the
16th century and currently has a consortium dedicated to developing and
promoting this bean.

Treviso
By far, Treviso biggest claim
to fame is the red raddiccho that shows up at the end of November and
is available at the market until February. The Treviso radicchio is the
first Italian vegetable to gain IGP (Indicazione di Origine Protetta)
status. The growth and ‘curing’ process of the radicchio is quite
complicated. In mid-November, mature chicory plants are harvested, with
their long root intact. The plants are gathered into bunches and placed
into deep trenches that are covered by plastic. The plants are then
removed, all decayed leaves are removed and the plant is put into a vat
of cool, running water. After 2 weeks of forcing, a sprout will have
formed and the plants are transferred to a warm and humid environment
to continue growing. Once again the large outer leaves are removed, the
root is trimmed, it is treated to another cold water bath and finally
the radicchio is ready for market. This radicchio is highly prized and
can be served both raw and cooked.
The area is also well known for splendid fruits and vegetables, including wonderful peaches and the “Asaparagi delle Rive”.

Vicenza
This
province may have the most varied ingredients: lamb, beef, pork,
chickens, ducks, game birds, fresh water fish and many types of fruits
and vegetables.
One particularly prized vegetable is the white
asparagus of Bassano del Grappa, which recently acquired DOC status.
The asparagus is grown under the earth, must be completely white,
although a tinge of pink is permitted, absolutely no green must be
present. They are huge asparagus, about the size of a large Cuban
cigar, but incredibly tender and delicious. 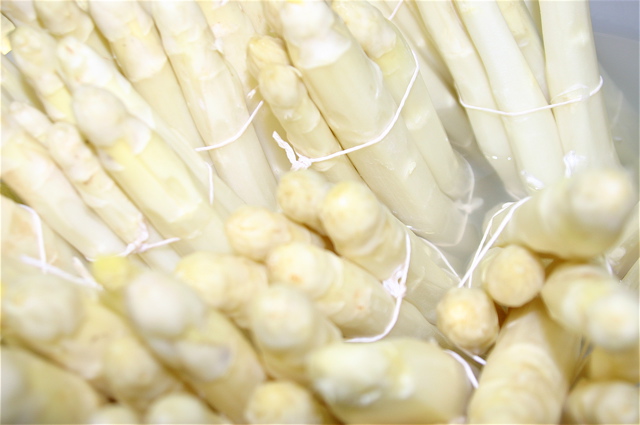 So,
although Venice dominates the Veneto, there is a cornucopia of
ingredients and recipes to keep us entertained and stimulated this
month. And what good fortune! This month is Carnevale…so men: get your
wigs and tights out; ladies: start practicing walking sidways thru
doorways (and don’t plan on eating anything…or breathing…until you get
that d*mn corset off!!). 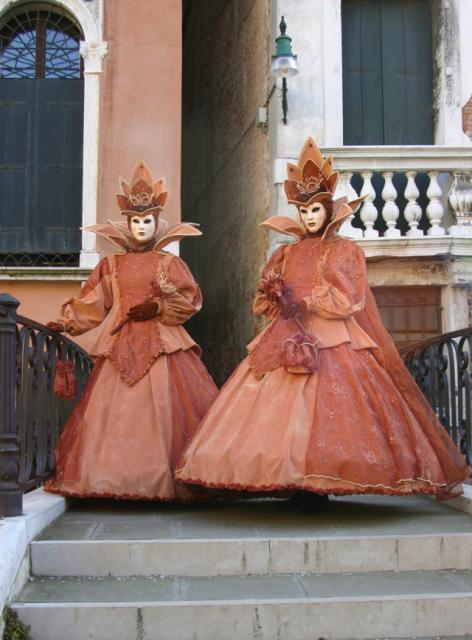