Revisiting an old love can be dangerous. You want the object of your love to be the same as when you last saw her, but you know that isn’t possible. More than ten years have passed since we’ve been to Paris, and the Paris we loved has changed.

We wanted to revisit our old haunts, to see if Café Gamin was still in the Marais serving the quintessential steak tartare. No. It’s gone. Replaced by a Maje clothing shop. I walked in hoping to see even one spec of the old candle wax drippings, or some ghost of the small plates of dried sausage with radishes and butter. But no, the shop gleams with international chain store blandness, nestled between other chain stores that could be found anywhere. 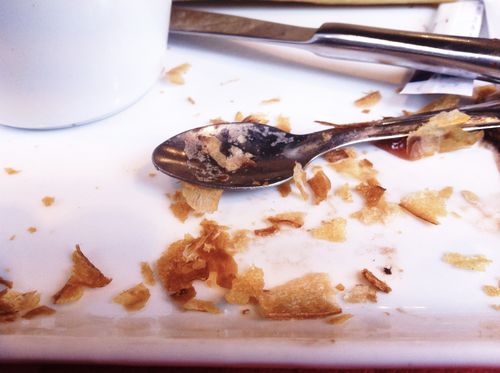 We came to Paris wanting to eat a buttery croissant that would leave crumbs everywhere. We wanted entrecote with endless frites, garlicky frogs legs, oysters and maybe a plateau of seafood. We wanted to sit at a sidewalk café, sip something and watch the world go by. We did manage to do most of this, although there were no frog legs to be had and we never did find the time for the entrecote and fries. 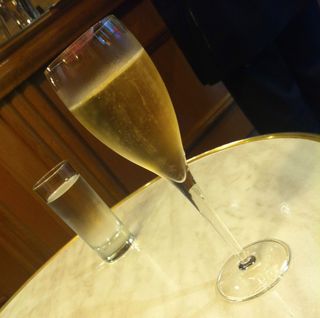 We came armed with a list of restaurants to try, some from our intrepid eater friend Mitch and recommendations from chefs I had met at #Mad4 in Copenhagen. Mitch had warned us that Paris was in danger of being Brooklyn on the Seine.

But, I’ll take this one step further.  The bare wood tables, the simple place settings (with maybe a lovely bespoke serving piece), and the oh-so-casual service, have become the food world’s international style. We could have been in Portland, Barcelona, Copenhagen, Williamsburg or Paris. The linen tablecloth, snotty sommelier and white-jacketed waiters are all relegated to your grandmother’s closet; now we can perch on backless stools at a rough-hewn counter and only wish there was decent service.

As the unique shops of Paris are vanishing, being replaced by international chains, so the design ethics of the restaurants have become homogenized. That’s not to say you won’t eat well, even magnificently, in Paris, but good service and tablecloths have become relics of a bygone era.

We did manage to eat magnificently and have excellent service at Restaurant David Toutain and Septime. 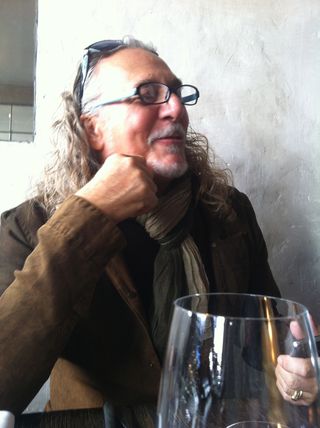 Septime, with its one Michelin star, is a friendly, laid back, open-kitchen affair. We opted for the 6 course tasting menu, because …well, because we were in Paris!

We tasted our savory way through a veal tartare dish that got its smoky flavor from a codfish cream emulsion, a single oyster floating in a pool of mushroom broth, a divine crispy rouget fish filet that sat next to a silky watercress puree, crackling-skinned baby chicken in a tiny puddle of fragrant black pepper broth.  But why stop there when a cheese course has been offered? The thinnest shavings of feta cheese with salt, pepper and bright green olive oil was a perfect finish to the savory courses. Now, onto the sweet: a fragrant vanilla cream with fruit and then a verbena/thyme gelato with crispy apple museli. (Septime Photos Here.)

It was a lovely meal that left us full, and a bit sleepy. True confession: we took a restorative nap on the lawn of the Place de Vosges; one of our very favorite places on the planet.

The next day, we were off to lunch at David Toutain. Not quite three days in Paris means we must be strong and eat until we cannot eat no more!

Whereas Septime’s decor was channeling lower Manhattan meets Brooklyn, David Toutain’s is zen and sparse, more midtown than downtown, but with a pleasant, approachable atmosphere.We opted for the surprise and delight menu because…well, you know, we were in Paris!

Toutain’s dishes were a mystery of mastery. Beautiful to look at, with their clever serving plates that never veered into ridiculous or theatrical, each dish was an elegant composition of flavors and textures. 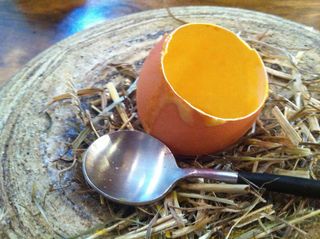 The amuse was a roasted stalk of salsify root perched on an artistic pile of branches. It looked scary, tough and chewy but the root was soft, yielding and unctuous when dipped into the accompanying parsnip and white chocolate cream.

For the next course, we were presented with an egg-shaped bowl containing a lurid red tube resting on a bed of seedy grains. Hmmmm…  We were instructed, more than once, that this was to be consumed in one bite. It looked big for one bite, but what the hell. Jeff went first and the look on his face made me grab for mine. A thin tube of beet root glass shattered at the first bite, and released a pillowy soft cream that had an earthy essence along with a smoky hint of acid.  When the lovely woman came over to remove the plates, I begged for more…forget the rest of the meal, just let me eat beets! She laughed and then came back with two more of these exquisite morsels. I love that woman! 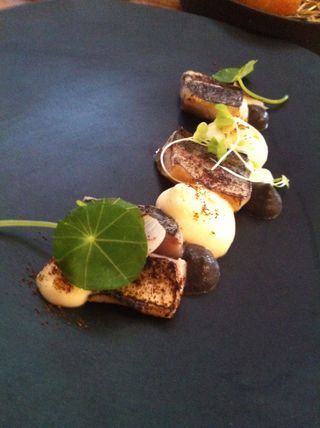 The various plates used flavor combinations that sound precious, but were actually harmonious, leading your tongue into new territory. Mackerel and coffee, caramel and egg, carrot nestled next to verbena cream, black sesame with apple all worked in ways that reminded me of Shola Olunloyo’s Studio Kitchen in Philadelphia.

The sweets were a bit of a mystery to me. I thought perhaps another chef was responsible for the deserts as the combinations were not as fluid. Cauliflower cream didn’t quite meld with the coconut ice cream (But they witheld the chocolate on my portion because I can’t eat chocolate so that may be the reason it didn’t quite work…but then don’t serve the dish if it’s missing the bridge, right?).  Then there was a crème brule’ with whimsical tuiles, but lurking underneath the crème was an aggressively hand soap flavored ice cream that destroyed the crème delicacy.  Jeff didn’t object to the sweets as much as I did, but that could be because he was having a moment with his buried chocolate truffle. (David Toutain photos here.)

On one point, we have to disagree with Mitch. There are not a lot of cocktail bars or a vibrant cocktail scene. Sure, there are places that say cocktail on the door, but they don’t really mean it. And what’s with mojitos being the default cocktail? Don’t they belong at the beach on a hot day, not overcast, chilly Paris?  Le Mary Celeste will satisfy your cocktail cravings, but you’d best keep the craving to a minimum. 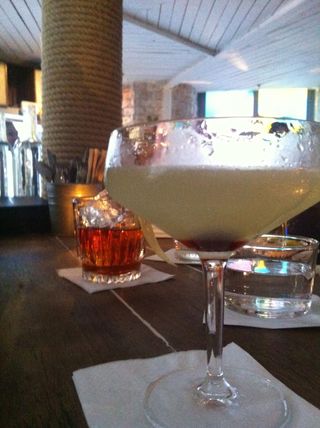 All in all, it was great to be in Paris for a few days, but as always, it’s fun to come home!